Panasonic Corporation, a worldwide Olympic and Paralympic partner, announced today that the company is launching a special photography project through its LUMIX S Series full-frame Mirrorless camera system for the Olympic Games Tokyo 2020.

In accordance with the Olympic Games philosophy, Panasonic has, since Olympic Winter Games Calgary 1988, supported the tournament over a quarter of a century as the highest ranking sponsor in “The Olympic Partner (TOP)” program.

As part of this commitment, Panasonic supports a series of projects shot by Adam Pretty, a world-renowned sports photographer for Getty Images using a LUMIX S Series camera system. The first project is titled “Make it Luminous." The athlete's ultimate motion across the practices of short track, high jump and judo which cannot be tracked by the naked eyes are visualized with the afterimage of light by attaching light emitting devices such as an LED to sports equipment or an athlete's body. Capturing the track of light drawn by each athlete's performance, the LUMIX S Series camera system depicts an unprecedented performance and expectation that will be unveiled at Tokyo 2020. More projects will follow through 2020.

Panasonic, with its state-of-the-art technology and solutions, will continue to “share the passion” and excitement of the Games with people worldwide. 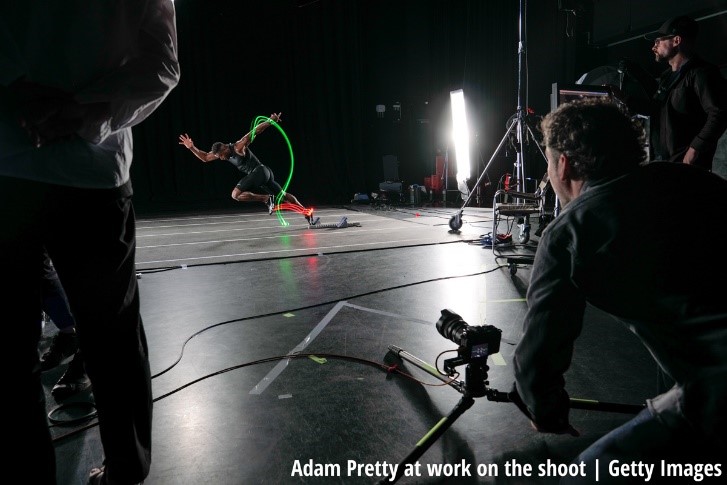 Adam Pretty at work on shoot

As a global citizen, Panasonic’s principles are aligned with the Olympic mission. The company has supported the Olympic Games for more than 30 years and the Paralympic Games since 2014, including through sponsorship and the provision of innovative technologies (in the "Audio Visual Equipment", "Home Appliance" and "Electric Bicycle" categories) developed over a century. Panasonic is committed to building a better world – a vision it shares with the IOC – through its worldwide sponsorship of the Games and via the nature of its everyday business activities.