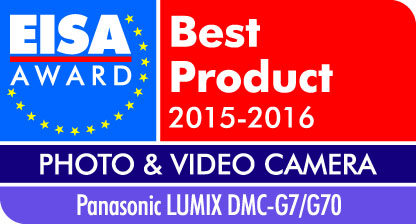 15th August 2015 – Panasonic today announces that two products from its 4K digital imaging family have been honoured with ‘Best Product’ awards from one of Europe’s most respected consumer electronic associations, the European Imaging and Sound Association (EISA).

Formerly the preserve of professional filmmakers and photographers, the LUMIX G7 impressed the EISA jury by opening up the world of 4K to everyone. Whether used for capturing memories on film to last a lifetime or taking amazing stills from 4K footage, the LUMIX DMC-G7 is changing photography for good.

In naming the LUMIX DMC-G7 as its ‘EUROPEAN PHOTO & VIDEO CAMERA 2015-2016’, the EISA jury noted that, “The G7 is a true video + stills hybrid camera that brings internal 4K video recording at a very affordable price. This is backed up by a full range of video features including microphone input and a focus peaking display. Stills photographers are not neglected, with a 16‐million‐pixel Four Thirds sensor, 2.36‐million dot OLED Live View Finder, ISO 100(Extended)‐25600, continuous shooting at 8 fps, and a silent electronic shutter with speeds up to 1/16000 sec. The large grip, twin control dials and fully articulated touchscreen give excellent handling. For amateur filmmakers in particular, the G7 is a game-changer.

The Panasonic HC-WX970 is the world’s first consumer camcorder equipped with the High Dynamic Range (HDR) Movie function in Full HD quality. It enables the user to record beautiful videos with a more dynamic range of contrast between dark and light areas when played back. The camera also features a unique additional camera on the side of the display to help capture different points of view, or provide narration for the footage. Video capture appears as picture-in-picture, and the camera also features an electrical zoom and dedicated titling.

The EISA Jury commented that, “Movie-makers looking for a 4K camcorder are rewarded by Panasonic’s HC‐WX970 –an affordable model that packs welcome features into its compact body, including an innovative twin recording function. In addition to its main Leica Dicomar lens (married to an 18.91MP sensor), the camera provides a secondary swivel lens next to the tilting 3in touch display. This allows simultaneous capture of two different scenes – with one placed in the corner of the main shoot, selfie‐style. Achieving high‐quality, smooth footage is made easy by the camera’s efficient image stabilisation circuit and Level Shot function that automatically counters tilt, and varied recording modes include HDR (High Dynamic Range) for brilliant, impactful pictures.”

Established in 1982, the European Imaging Sound Association (EISA) is a multimedia association that tests consumer electronic products. With a membership including 50 audio, mobile, video and photo magazines from 20 European countries, EISA’s awards are known as one of the most prestigious consumer recommendations that products can receive, and a key indicator for the best consumer purchasing decisions.

Panasonic Corporation is a worldwide leader in the development and engineering of electronic technologies and solutions for customers in residential, non-residential, mobility and personal applications. Since its founding in 1918, the company has expanded globally and now operates over 500 consolidated companies worldwide, recording consolidated net sales of 7.74 trillion yen (57.74 billion Euro) for the year ended March 31, 2014. Committed to pursuing new value through innovation across divisional lines, the company strives to create a better life and a better world for its customers. For more information about Panasonic, please visit the company's website at http://panasonic.net